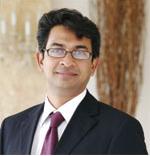 Google appoints Rajan Anandan as the Vice President of India Sales and Operations to lead the Google India business. The appointment was announced on 11 January, 2011. Anandan is of Sri Lankan and Tamil descent and is the son of the Guinness World Records holder V.S. Kumar Anandan. He did his BSc from MIT and MSc from Stanford.

Anandan's brief history in the hi-tech and leadership world can be briefly dated back to the days when he partnered with McKinsey & Company. After that in 2006, he led Dell India as the Vice President and Country General Manager. During his leadership Dell's business grew from $250 million to over $800 million. In 2008, Anandan joined Microsoft as the Managing Director of Microsoft India. There too, he was responsible for Microsoft India's recognition as the Number 1 subsidiary among the emerging markets worldwide (China, Russia, Brazil, Mexico, Turkey, South Africa and India).

Daniel Alegre, President, Japan and Asia-Pacific Operations comments, "We always hire the best talent available. India is an important growth country for Google. We were voted the best company to work for in India and we are hiring across functions. With Internet users growing at 50% year-on-year, a strong leadership team will ensure that Google captures this tremendous opportunity. We are happy to have a leader of Rajan’s seniority and calibre to manage and lead it to the next phase of growth."

In Google, Anandan takes over Shailesh Rao, who has been acting as the Managing Director, Media and Platform Sales of the Japan and Asia-Pacific as well as the Managing Director and Head of Sales, Google India. Rao will continue to stay in Gurgaon and focus full-time on the Media and Platform Sales business for Google. Rao's contribution to Google has also been praiseworthy. He led Google India from the start to a successful major business.

Google is thankful for Rao's contribution and his dedication towards the company and is delighted with the joining of Anandan. With its current success and efficiency, Google seems hopeful and confident to scale even greater heights in the days to come.