The Pros & Cons of Google Suggest For Search Engine Optimizers and Beyond!

A couple of days ago, we had reported about the inception of Google Suggest, a search suggestive feature that has been designed by Google to simplify the user search experience, by providing highly accurate search suggestions. As per Google, â€œwe’re excited because Google Suggest will be “graduating” from Labs and available by default on the Google.com homepage. Over the next week, we’ll be rolling this out so that more and more of you will start seeing a list of query suggestions when you start typing into the search box.â€

One of the biggest effects that Google Suggest might have on the search experience would be that the searches will most probably lose the long tail keywords. The chances are that, users would not manually input long search queries, instead would rather rely on Google Suggest and prefer the short tail queries suggested by Google. 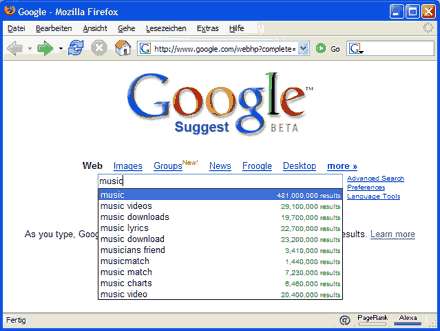 As Martin Bowling explains, â€œGoogle will now be forcing users into high-volume, high-money terms (i.e., terms that people are bidding on via Adsense) it’s almost like Google is creating a new Top 10 before the user is ever even taken to the SERPs. By having your primary keywords that you are ranking for listed in this drop down, you are far more likely to get traffic than those related terms that aren’t being listed. When presented with options, people will generally choose one.â€

However, as we also conduct and maintain PPC campaigns at PageTraffic, we have observed that the Google Suggest feature is especially impactful for our efforts and like all other PPC firms, we would also like to be on top of our game and be aware of the phrases that are suggested frequently as well as relevantly and bid accordingly.

Over at Site Creations, Scott Clark, has put up a very interesting post that highlights the 9 potential ways, through which Google Suggest might change the pattern of search marketing. These potential steps are: