In a rather surprising move, Yahoo has just announced the acquisition of Arab site Maktoob, a very popular Arabic web portal that offers amazing services such as search, payments, social network, and auctions.

As per the reports, it is a new initiative that Yahoo is going to acquire an online property in a localized language. This move is being regarded the most viable as Maktoob.com is the largest online community of Arab. With this acquisition, Yahoo will be able to extend their influence over some 16.5 million people.

Yahoo calls this deal with Maktoob its “biggest geographic expansion in years.”

This is not just about acquisition, but about moving into a completely different and new market. With this deal, Yahoo will be able to spread its translating services into Arabic. According to official Yahoo corporate blog:

“Initially, we’ll plan to introduce Arabic versions of Yahoo! Mail, Messenger, Search, and our homepage and then eventually local versions of properties like News, Sports, and Finance. We’ll also focus on creating content and services tailored to the region. No other global company has made this kind of investment in local relevance for the Arab world.” 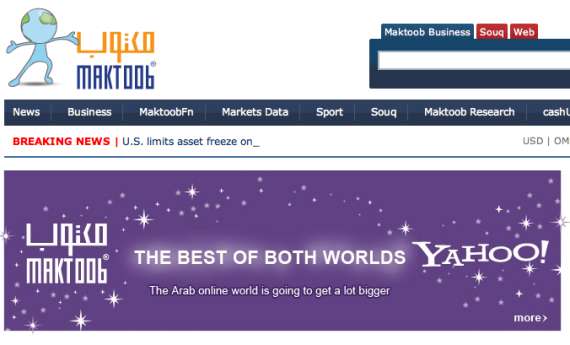 The financial terms of the acquisition, which is to be completed in the fourth quarter of 2009 are still undisclosed. After the Maktoob becomes its property, Yahoo will roll out Arabic versions of its different web products and services such as Yahoo! Mail, Messenger, Search and more.