Google came up with the Python Sitemap generator almost three years ago!

Now according to the Official Google Webmaster Central Blog, Google has announced a new open-source Sitemap Generator that finds new and modified URLs based on your webserver’s traffic, its log files, or the files found on the server. 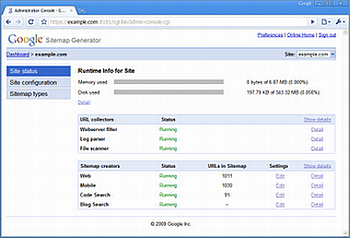 â€œGoogle Sitemap Generator is a server plug-in that can be installed on both Linux/Apache and Microsoft IIS Windows-based servers. As with other server-side plug-ins, you will need to have administrative access to the server to install it. You can find detailed information for the installation in the Google Sitemap Generator documentation. – Google

Once the URLs are found , the following Sitemap files are generated: