Google, continuing on its battle against spammy link/blog networks, has taken down BuildMyRank. Along with the blog network, the sites linking with it have also been penalized and some deindexed by Google completely. This was confirmed by BuildMyRank.com and they have shut shop completely. They are now working through refunds to clients and payments to affiliates. Folks at BuildMyRank.com said, "in our wildest dreams, there’s no way we could have imagined this happening." But their downfall has been accepted by the search industry as another spam center being ‘nuked’ by Google. Matt Cutts responded on Twitter. 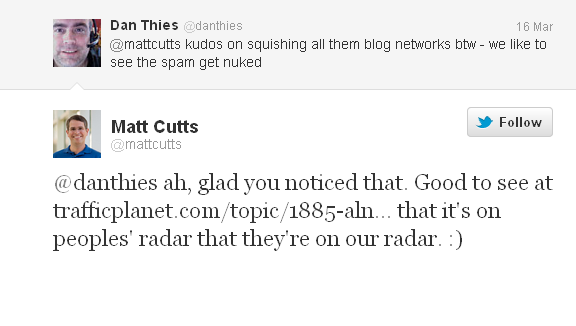 As Google deindexed an "overwhelming majority" of their networks, the site has completely shut business, despite believing that they provided "better quality service,". Google has been going after link and blog networks and hitting them with paid link penalties. After every such takedown, there is increased speculation amongst SEOs whether, their competitors can harm them by linking them to such site.

Search expert Barry Schwartz posted this on his Google+ page  and SEOs are discussing how can they be protected from their competitor, if they thought of bringing them down this way. But Google has said that such links can’t hurt you, however discussions continue. What do you think? Are you safe from your competitor?