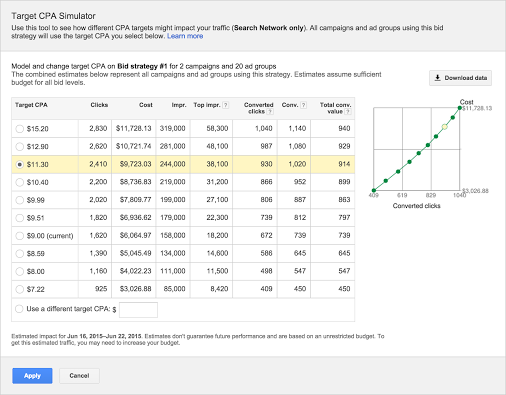 Inside AdWords first announced Target CPA Simulator this spring. The latest version of it is able to give an estimate of what the conversions will go through if Target CPA is adjusted. If the above example be taken into account, it says that if the CPA is increased from $9.00 to $11.30, the expenditure would shoot up by $3,700. This would also mean 175 more conversions. The estimate drawn by the Simulator would be based on the past week, along with the assumption of no budget constraints.

The role of target opt-in recommendations is to come up with attainment goals when implementing a target CPA or target RAOS bid plan to campaigns. The targets suggested by Google will depend upon your CPA or ROAS results of from the past two weeks. Historical performance maintenance is the prime goal, while the bidding engine progresses to “ increase conversions or revenue at that similar target”. The new tools can be found on the web interface and is accessible to all.