Google’s Webmaster Trends Analyst John Mueller announced on twitter that Google would now convert PDF documents, along with other forms of document like Word and Excel, into HTML formats for better search indexing of the documents.

Mueller’s Tweet said, “FWIW we convert PDFs & other similar document types into HTML for indexing too, so theoretically there wouldn’t be too much difference.” 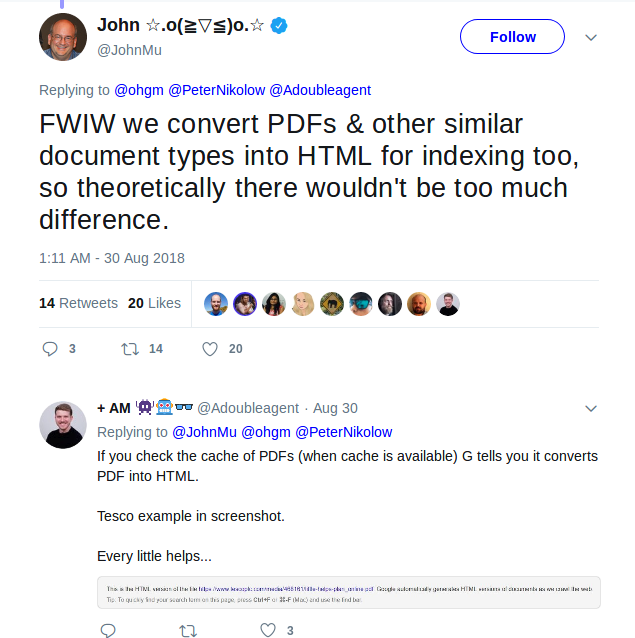 The conversion of documents is of much importance and relevance for search engine optimization. As many SEOs couldn’t enter the realm of page 1 of the search results the story went that Google is unable to decipher non-HTML content documents. The cloud was soon cleared when Google announced, “Google first started indexing PDF files in 2001 and currently has hundreds of millions of PDF files indexed.”

It is a known fact that Google indexes the documents but, what is less known is, that Google refreshed the content and links within PDFs slowly. The reason being, PDFs do not get updated on their own, same as how the images that don’t get updated that often.

Chances are that PDFs are even less often updated than the images. Though Google conquered the doubts by saying that, “In general we index PDF files like we would normal pages on a web site. What probably would happen with PDFs is that we don’t refresh them as quickly as normal HTML pages because we assume that a PDF file generally kind of stays stable.”

But, does Google index all types of PDF documents? Generally, Google does index textual content (written in any language) from PDF files that use various kinds of character encoding, provided they’re not password protected or encrypted. If the text is embedded as images, we may process the images with OCR algorithms to extract the text. The general rule of the thumb says that, ‘if you can copy and paste the text from a PDF document into a standard text document, we should be able to index that text.’

After all the discussion we boil down to the point that PDFs can surely rank similarly to the other web pages. PDF documents that manage to rank highly in the search results, should thank their content and the way they’re embedded and linked from other web pages.