What exactly is Mobile-First Indexing?

In an attempt to offer the best experience to searchers across all devices, mobile-first indexing means Googlebot shall only crawl and index a page’s mobile version.

As more searches are being conducted on mobile devices than on desktop browsers, this is a way through which Google wants to ensure that most users find optimized content on their screen. In case a site doesn’t have a mobile-friendly version then Google will crawl and index it as it is.

So, mobile-first index is in no way different from the main index. All content will be live inside the same index. But Google will now use mobile versions when they are available.

Google has assured website owners that their rankings won’t be impacted by mobile-first indexing.

There is only a change in the way content is collected for Google’s index. So, a site which has migrated to mobile-first indexing won’t have an upper hand over a site which hasn’t migrated. However, mobile-friendly content will usually be ranked higher in search results when users are searching on their mobiles. This measure has existed since 2015.

Websites which have migrated to mobile-first indexing are receiving notification through Search Console. Moreover, site owners can expect to view considerably higher crawl rates from Smartphone Googlebot. Google’s Search Console notification will look similar to this example below:- 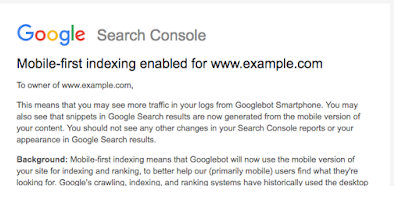