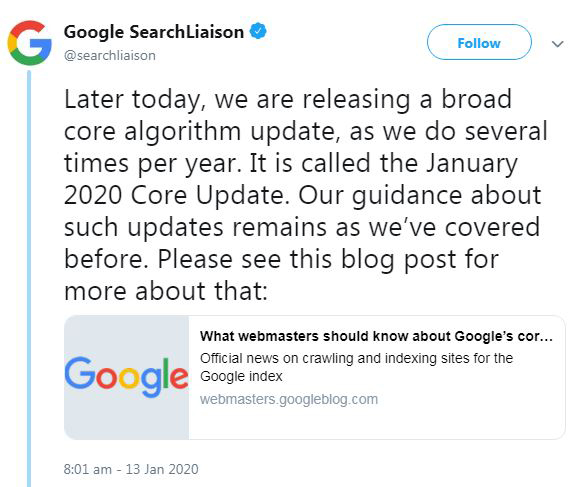 The latest core update to take place before this was the September 2019 core update. That update didn’t have a significant impact on most SEOs and webmasters as it didn’t have a major impact like previous core updates. Google also released another update in November last year, but it was focused on local rankings.

What to do if a core update hits your site?

Google has given suggestions on what actions you can adapt if you a core update hurt your site in the past. There aren’t any particular actions you can take for recovery. The impact of negative rankings may not indicate anything wrong with your web pages. But, Google has offered a list of questions which you need to consider if a core update has hit your website.

Each time Google updates its search ranking algorithms, it indicates that your website can do better or worse in its search results. Having a clear idea of when Google makes these updates can help you understand if there was something that you changed on your site or Google changed its ranking algorithm. Since Google has released a core ranking update, keep track of your analytics and rankings. Also you can find more information related google latest updates on shoppingthoughts seo blog. So what are you waiting for? Visit that site to get to know more about that.