Rand Fishkin, a popular name in SEO world, in a recent analysis on Google clickstream data discovered that zero-click searches on Google have steadily risen over the past three years!

Based on the data provided by Jumpshot, in Google’s US web search engine 48.96% of all the Google searches ended without a click, resulting in an increase of 12% from the first quarter of 2016.

While in the first quarter of 2019, 41.45% of Google searches resulted in organic clicks to non-Google sites and 5.9% of searches ended with the user heading to another Google-owned web site.

The report also shared the visuals depicting the inclusive of both desktop and mobile searches, showing what happens after searchers performed a browser-based query on Google.com in the US last quarter: 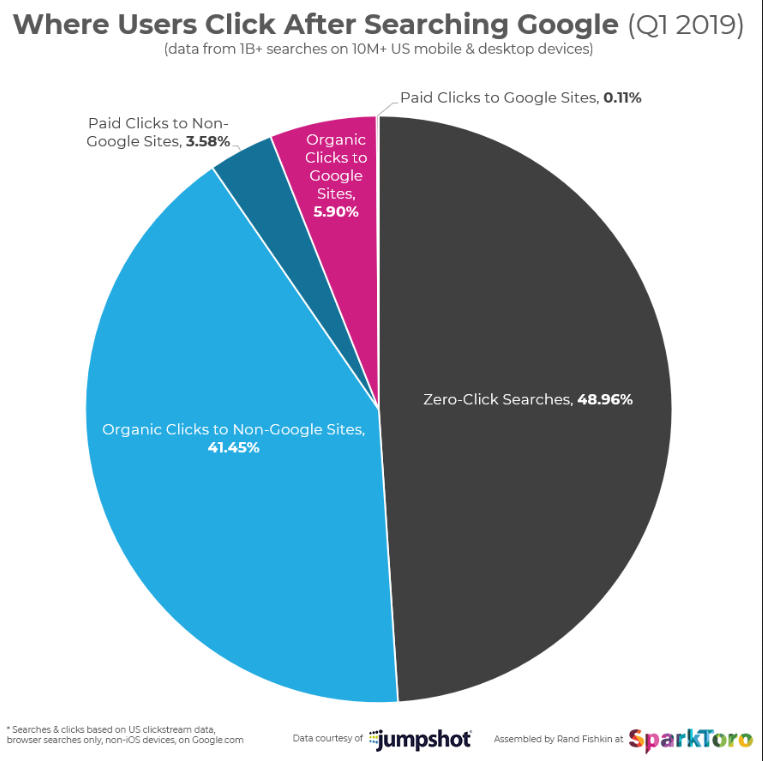 It clearly shows that despite the rise of both zero-click searches and paid search clicks, organic search clicks are still very much alive. In fact, for every click on a paid result in Google, there are 11.6 clicks to organic results.

The report included data of a list of domains including:

As per the analysis, most of these domains receive a very small amount of Google’s overall search traffic. 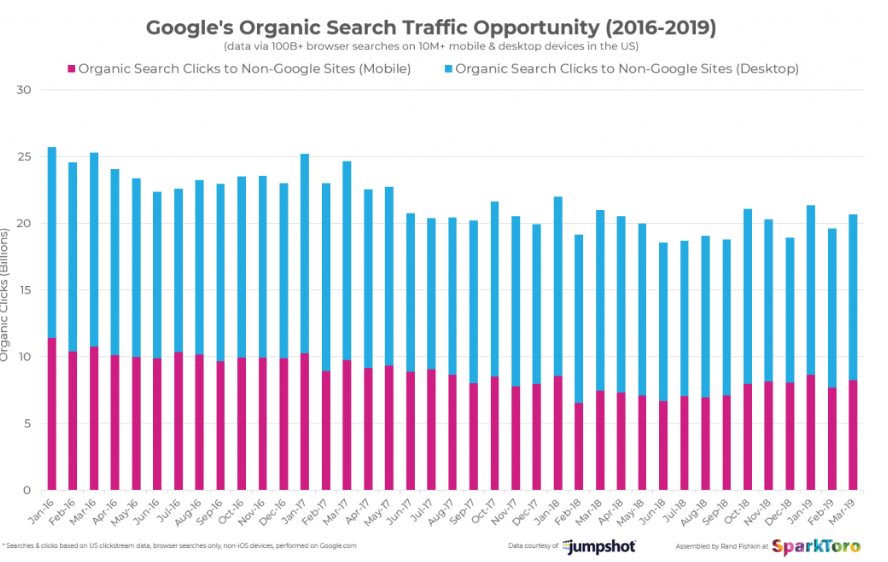 He has shown mobile (in pink) and desktop (in blue) to help illustrate where opportunity is shrinking. Not surprisingly, it is true on both types of devices, but far more rapid on mobile, where Google’s aggressive SERP features and instant answers have come to dominate numerous results.

Organic Click Through Rates: By Jumpshot’s estimate, there were ~75.6 Billion organic, browser-based search clicks available from Google in the US in Q1 2016. Three years later, than number is ~61.5 Billion. In 2019 Google sent ~20% fewer organic clicks via browser searches than they did in 2016. 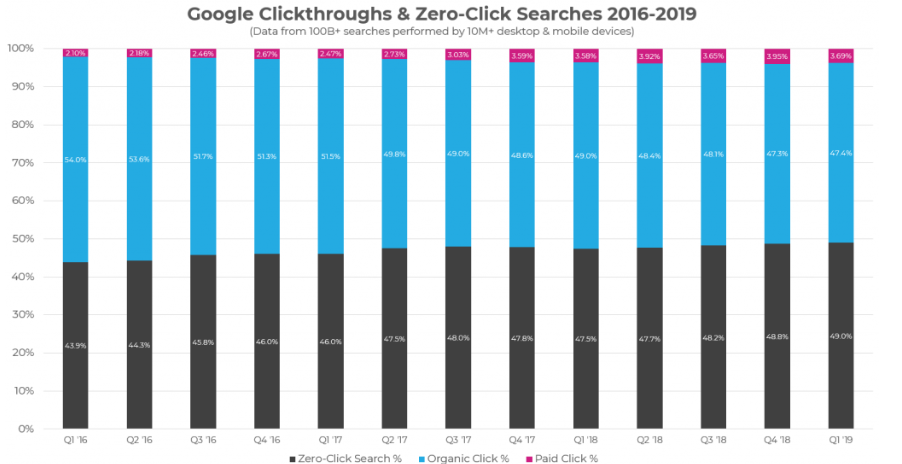 The report also shows that Google has grown the CTR of paid clicks by more than 75%. They have grown the percent of queries with zero-clicks by almost 12%. And, as a result, the organic CTR has dropped by more than 13% to 47.4%.

Desktop click-through rate is accounting for only a small portion of that drop: 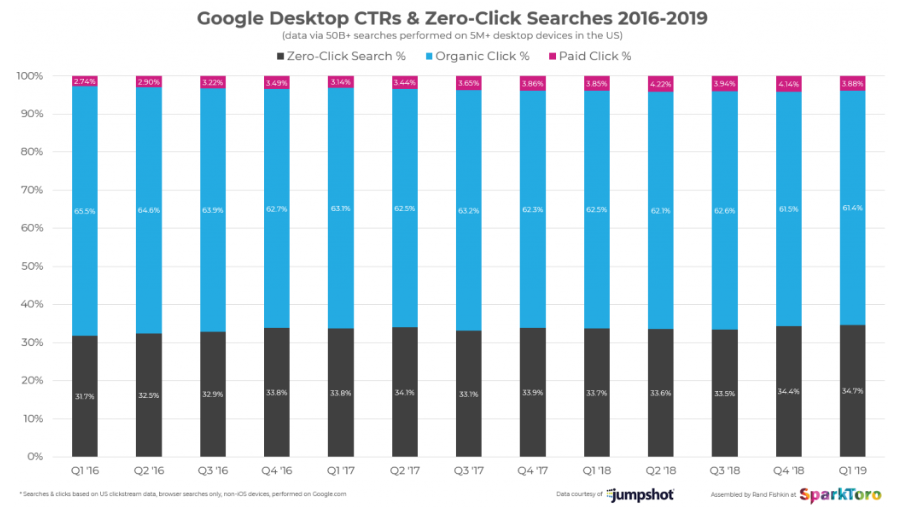 While mobile is responsible for the lion’s share of growth to paid, growth in zero-click searches, and the drop in organic: 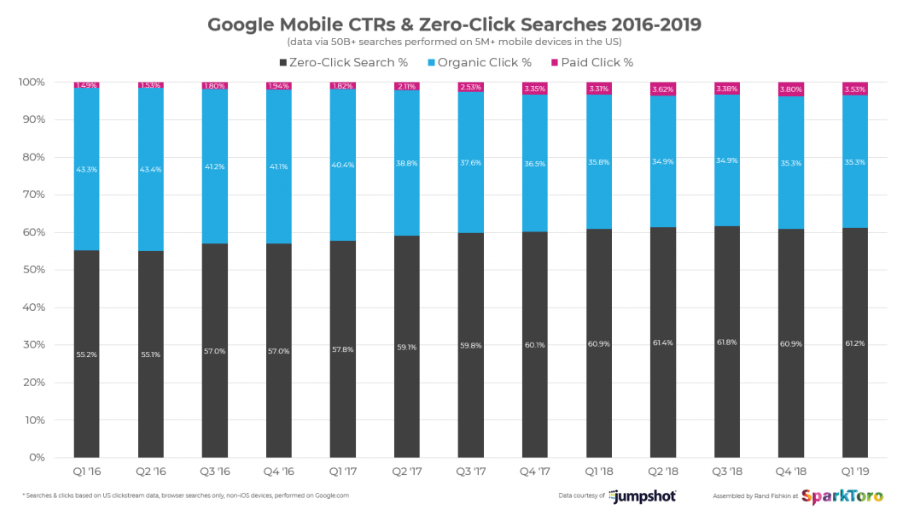 The report also stated that the desktop and mobile browser activity have largely plateaued, but mobile app search has almost certainly compensated for more than this relatively small decline the past three years.

Since wealth concentration and search traffic concentration are correlated, Google having more than 94% of the US search market, sends more than 10X as much traffic as the next leading referrer on the web, dominate the online advertising market, and control the livelihoods of millions of small business owners, startups, publishers, and web creators.

In the report he also stated, “A search ending in zero-clicks is not useless to marketers or publishers. Yes, the metrics are harder to track and the ability to convert a visitor to take action is reduced, but the ability to influence that searcher still very much exists.”