There are a number of Google web search rank checking tools which help webmasters to keep a track of changes in Google algorithm or ranking fluctuations. But till now, there was no specific tool which could be used for tracking local ranking changes. To fill this void, BrightLocal has released a tool named Local RankFlux which keeps a track of changes in local rankings.

Local Rankflux is similar to Mozcast in a number of ways, but is designed for local. BrightLocal stated “Local RankFlux is the only ranking fluctuation monitoring tool for local search. We track daily ranking movements across 14,000+ keywords to measure volatility and identify suspected algorithm updates.Get a head start at the earliest sign of volatility by subscribing to Local RankFlux email alerts below.”

Experts are yet to figure out how accurate this tool is.Tracking local ranking fluctuations is really hard since you need to check all places on the basis of region. It is also difficult to follow the chitchat unless something really big has happened.This is what this tool is trying to do.

Joy Hawkins stated in the Local Search Forums, ‘’I’ve been waiting for a long time for a tool like this. BrightLocal just launched the first and only tool (to my knowledge) that tracks changes in Local SERPs. It tracks 28 keywords x 26 industries x 20 cities = 14,560 keywords (560 per industry) and lets you know when there are lots of variations.” 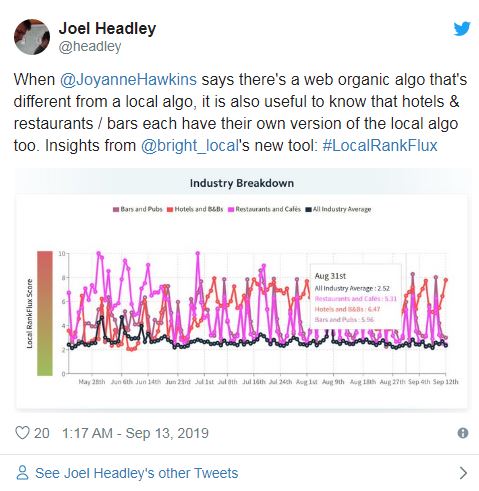