SEO Jobs: Only 45% Of SEO Specialists Feel Their Job Is Secure

How secure SEO jobs are? Does SEO professionals feel satisfied with their jobs? Answering such questions became easier when a survey came out showing the real picture pertaining SEO job satisfaction.

A survey of almost 500 SEO specialists shows that less than half feel secure in their job positions, citing algorithm changes as a cause of concern.

And 60% of SEO specialists feel they’ve experienced layoffs or firings as a result of algorithm changes.

Nearly 1 in 4 SEOs perceiving their job security as wobbly and uncertain, most report a high level of job satisfaction.

Over two-thirds of SEOs report satisfaction with their jobs, most commonly describing their work as “creative,” “engaging,” and “intelligent.”

Like any other job, being an SEO professional carries its own set of challenges and frustrations. For example, on an average of three days a week, survey respondents said they exceeded the typical eight-hour workday.

Further, roughly a quarter of SEO experts worked for over eight hours five or more days a week. The reason for aggresivley putting in so many work hours could be tight deadlines faced by many in the industry. Nearly 44% of SEOs said they lost their calm and were frustrated due to short time frames.

Most Feel That SEO is Not Their Long-Term Career:

People working as SEO professional don’t have any long term plans to stay in it for long. The majority of survey respondents say they want to stay in their field for only 1 to 6 more years.

Whereas, less than 12% of SEOs say they’ll remain in the industry for the remainder of their career. 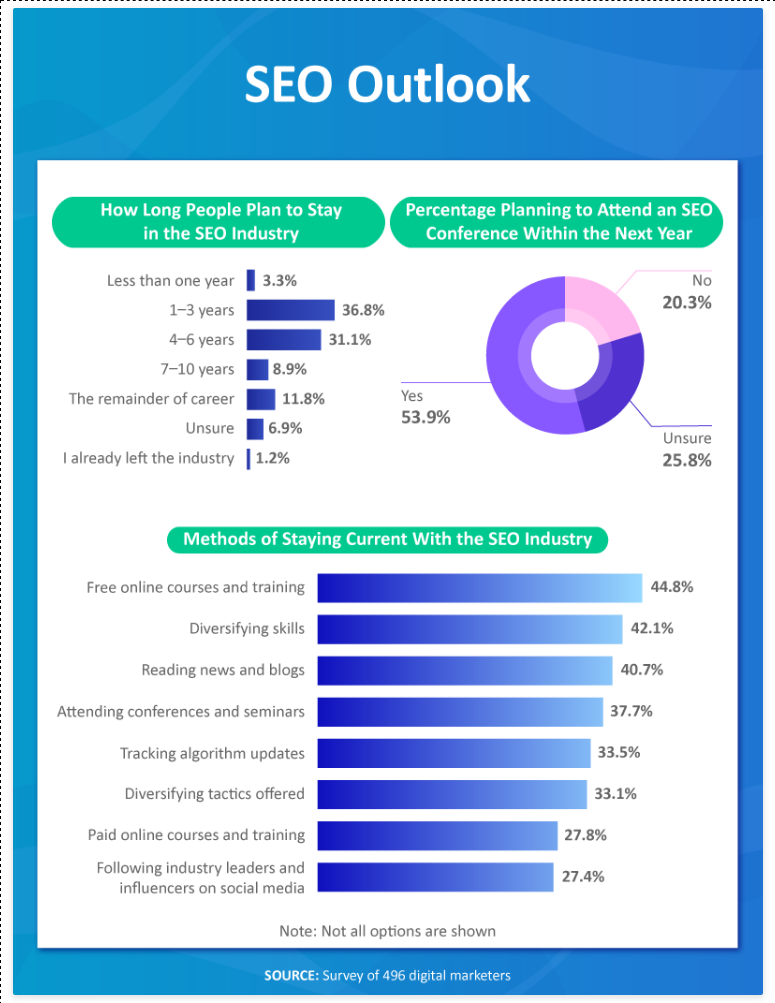