"A lot of people focus on monthly active users or even registered users to demonstrate their size and scale. We think this is becoming on old way of looking at the media world. In this world, understanding who comes back at least once a month is only part of the picture. Instead, businesses should focus on people who come back online every single day, because that is how they live their lives. People are online numerous times in a single day and are constantly connected; creating, sharing, and engaging with the content that matters to them.

For advertisers, this will help to create campaigns that can reach the right people at the right time on both desktop and mobile. Old ways of reaching people are becoming obsolete. Advertisers of all sizes should be able to reach all the right people and do it quickly and efficiently".

The new metrics will be aimed at letting brands and businesses focus better on ad campaigns. The social network said that there are more than 128 million daily active users via web and over 101 million users via mobile in the US.

Earlier, Facebook shared only the combined web & mobile user’s numbers region wise and the number of mobile users globally. In the image given below, you can see the total user counts for Facebook Q2 2013 at the top, which is breakdown region wise but not country wise. The daily mobile users count is also not broken down geographically. 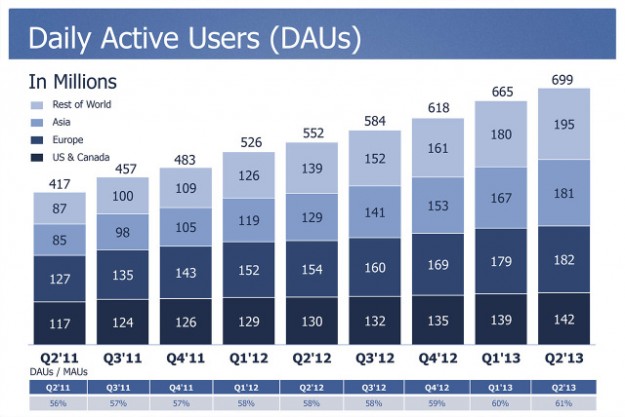 The problem with these stats is that all the users are not created equal when we talk about the business of Facebook. In the second quarter of 2013, Facebook revealed that the average revenue per user per year (globally) it made was $1.60. However, it is important to notice that Facebook made only $0.63 per user in developing & fast-growing markets. While in the US & Canada region, it earned $4.32 ARPU per year.

The improved transparency by Facebook will help businesses in figuring out the high monetizing market and targeting their ad campaigns accordingly.