Facebook took a major step towards showing relevant ads to users, irrespective of the device they use. The social network officially introduced Atlas at the Advertising Week 2014 in New York. The revamped Atlas will allow advertisers to be a part of the online and offline process & show ads even when the users are not on the social network itself. The news of the launch was reported earlier this month by Ad Age and The Wall Street Journal. 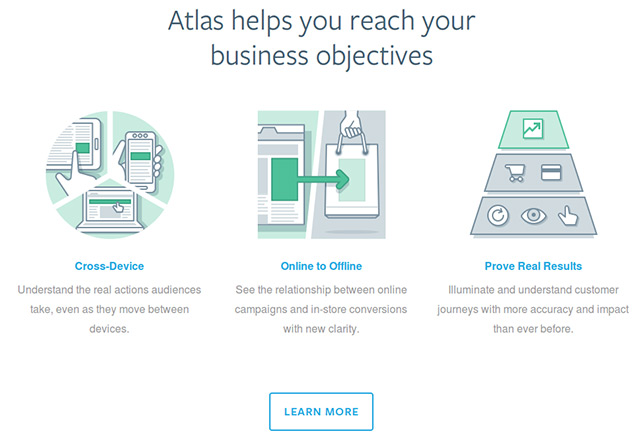 Erik Johnson wrote in the blog:

“Today, we are announcing the launch of Atlas. We've rebuilt Atlas from the ground up to tackle today’s marketing challenges, like reaching people across devices and bridging the gap between online impressions and offline purchases.

People spend more time on more devices than ever before. This shift in consumer behavior has had a profound impact on a consumer’s path to purchase, both online and in stores. And today’s technology for ad serving and measurement – cookies – are flawed when used alone. Cookies don’t work on mobile, are becoming less accurate in demographic targeting and can’t easily or accurately measure the customer purchase funnel across browsers and devices or into the offline world.

Atlas has been rebuilt on an entirely new code base, with a user interface designed for today’s busy media planners and traffickers. Targeting and measurement capabilities are built-in, and cross-device marketing is easy with new ways of evaluating media performance centered on people for reporting and measurement. This valuable data can lead to better optimization decisions to make your media budget even more effective.”

The Journal called Atlas to be a re-engineered version of Atlas Advertiser Suite, which was developed when it was still owned by the Microsoft. The platform which was acquired by Facebook in February 2013 will provide advertisers a better understanding of which Facebook users have actually seen, interacted with, or acted upon ads. It will also offer an automated demand-side platform and ad-buying bidding tool, which will target the Facebook users elsewhere on the Internet.

The Atlas platform allows advertisers to:

According to Facebook, Atlas is a more people-based marketing, where advertisers can follow the target audience on various devices.

It helps in improving online ad measurement by using cookies to see which users have seen the ad. Facebook says that Atlas will link the ad interactions of the user with the Facebook account, even if the ad has appeared on a third-party website.

Atlas evaluates the real actions of the audience across multiple devices and help marketers in understanding their audience. Since, cookies do not work on mobile; it is difficult for marketers to track interaction on mobile ads. Facebook will tie the ad data to the user profiles that will allow tracking across devices. The social network will work with a key group of partners that reaches across social, search, creative management and publishers.

Atlas has a huge potential as the maximum number of users are spending most of their time logged into their Facebook accounts. Thus, tracking real time activity of the users related to their purchases will be easier. The revamped Atlas can pose a threat to Google's position as well.