Tweets are now prominently placed in Google’s search results with tweets appearing for trending topics in a new carousel format. Twitter will gain new traffic though it won’t directly earn from the display.

The news has been announced by both Google and Twitter. Google is displaying tweets in a new and more graphical way on mobile devices, and will soon appear on desktop as well. The search engine giant and the social networking site had deal earlier this year to bring more tweets into Google’s search results.

This has been launched on Google.com in English in the Google app (on Android and iOS) and on mobile browsers. Gradually, it will be rolled out to more languages and to desktop.

When you want to know about the latest thing, you can know about it directly from Google. For instance, for getting update on NASA, ask the Google app about “NASA Twitter” and you will see Tweets from @NASA in the search results. 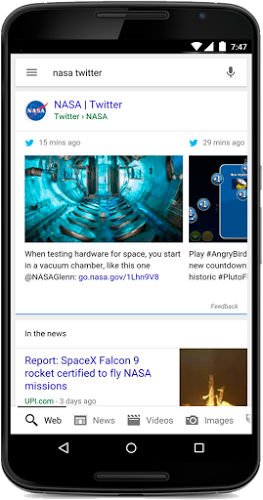