YouTube has launched "Top Fans" tools to help the YouTube creators in identifying, understanding, and interacting with their most influential and engaged viewers.

Originally unveiled at VidCon in early 2013, Top Fans is a social feature that helps broadcasters in identifying their most popular viewers. Google will be rolling out Top Fans feature to all the channels that have more than 5000 subscribers.

YouTube Top Fans will allow the broadcasters to see their most popular viewers on the basis of how engaged & influential they are with the content that you serve. The Fan Table will be updated daily and can be sorted out on the basis of engagement level such as likes, comments, and public actions or by number of subscribers. 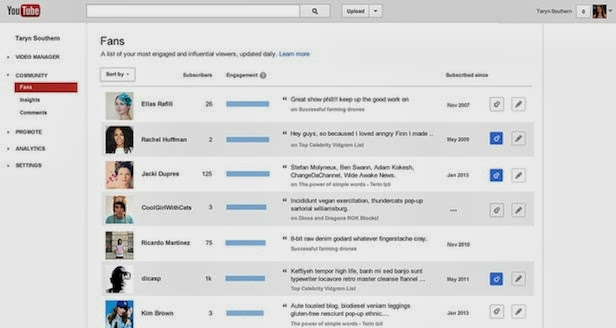 The Top Fans feature is integrated tightly into Google+. If your YouTube channel is connected to Google+ account, you can add viewers into circles and send them direct messages.

The insights view will let you set up an initial Google+ circle of Top YouTube Fans. A ticker of their latest engagements with you videos will appear in the circle, making it easier for you to reply to their comments. You can also see the other videos and channels you fans are engaged in. Moreover, you can start a question, ask a question via Google+, upload a video, or share behind-the-scenes photos with them.

YouTube will also prompt your top fans to follow you on Google+, when they will be watching your videos.