We have all played ‘Monopoly’ the game, as we grew up and still on weekends or on family picnics or getaways, Monopoly is one of the preferred games. However, Monopoly’s ‘monopoly’ is about to end. Over at Blogoscoped , Google has introduced an all new Googolopoly Game.

Although mostly based on monopoly, this game’s theme and ultimate goal is quite different. Unlike in Monopoly, where players had the goal to gather huge sums of money, in Googolopoly the player’s goal is to â€œorganize all of the worldâ€™s information.â€ To achieve this, you can buy or build internet properties. The board includes fields like â€œGoâ€ or a â€œdeadpoolâ€ jail (â€œ404 error file not foundâ€) and properties you can buy, range from Jotspot, YouTube, SketchUp, over to PayPal, eBay, Yahoo! and Microsoft. 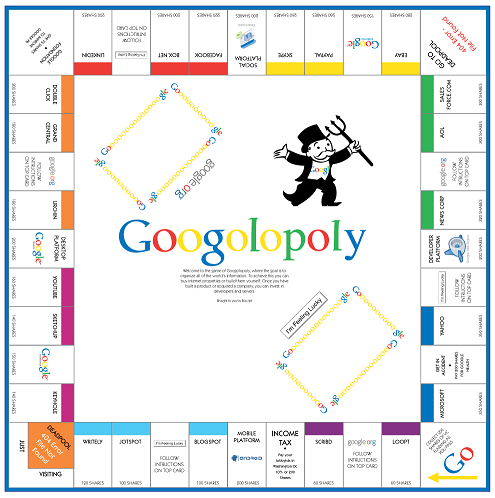