App developers would now be needed to add markup to their apps and submit a special sitemap file to Google via the Google Search Console (formerly known as Webmaster Tools) and verify their apps.

Google said iOS users will begin seeing these initial groups of apps show up in their search results both in the Google App and Chrome for signed-in users globally in the coming weeks.

Here is a picture of how it may look: 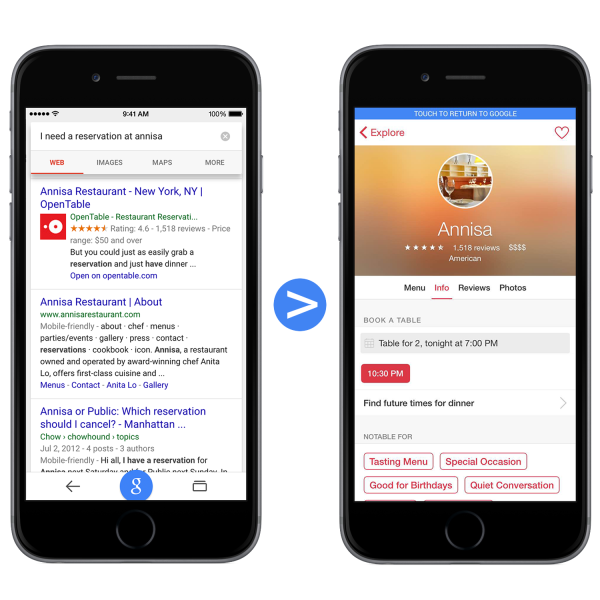 Though right now you can’t get your iOS app into this group of apps. But you can get a head start, by preparing your app for iOS App Indexing with Google. Here is how:

Google uses app indexing as part of their mobile ranking factor, so there is potentially a lot to gain by adding this markup. To learn more about Google App Indexing, click here.

Additionally, Google also announced that Google’s goo.gl short links function now supports linking to not just web content but also to the app content. You can have a single short URL and that URL can open up either the web, iOS or Android counterpart. This only will work if you use App Indexing so that Google can know that a specific URL is unique across web, Android and iOS.

“Starting now, goo.gl short links function as a single link you can use to all your content — whether that content is in your Android app, iOS app, or website. Once you’ve taken the necessary steps to set up App Indexing for Android and iOS, goo.gl URLs will send users straight to the right page in your app if they have it installed, and everyone else to your website. This will provide additional opportunities for your app users to re-engage with your app. This feature works for both new short URLs and retroactively, so any existing goo.gl short links to your content will now also direct users to your app.”