Though Google’s strategy with the search engine is â€œthe simpler the better,â€ but it seems that cultural demands placed on the search giant is forcing it to tweak the philosophy a bit in Korea. Not too far back an alternative design for Google’s China page was tried out, to experiment with the push model (Yahoo/ portal-style) vs the conventional Google.com pull model, see: Google China’s Trying Alternative Homepage Designs!.

Now, the Korean episode entails molding the local search engine service into a graphic-rich style, which suits the Korean tastes much better. However, the Google’s International Project Manager Jung Ki-hyun states, “This is not a Korea-only project. All of Google has been involved in this project, and we are thinking of adopting the same system to other language versions.” 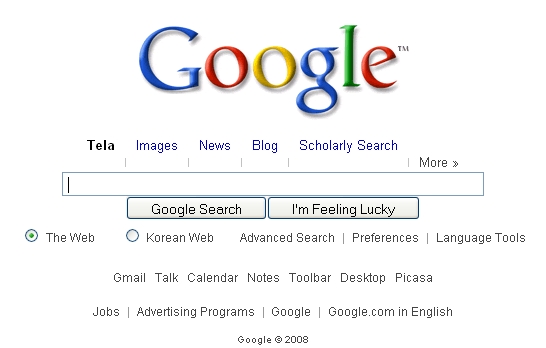 So are we beginning to see a change in Google’s philosophy? Moreover, multi-column, contents-tailored look is on the anvil for other countries as well, said Jung Ki-hyun.

While too many details have not been let out, but Jung Ki-hyun said that users response to the categorized, graphic-rich look is already being monitored in several countries.

The move is also being seen as a measure to compete with the Korean portal websites such as Naver and Daum which are more graphical and replete with images and display news and graphics in different sections.

“We didn’t want to make the Korean site the same as our global site…So we have worked to develop a new user-interface to best suit the Korean Internet users and this is the product” said Google Korea CEO Lee Won-jin, in a press conference in Seoul. While Google and Yahoo! Are two most popular websites in the world, for Korea their search engine market share is 5% only. Both Naver and Daum lead with the search engine market share.

Armed with this newer interface Google expects to distinguish itself from other search engines in Korea. â€œ…growth potential is huge given its broad base of Internet users. Weâ€™re not setting any domestic market share target, but we expect the new services will help,â€ said Lee Won-jin.

It appears the Google is striving to make its presence felt in Korea in a big way, only a couple of days ago the Korean version of the YouTube was launched as well. Even when Google tries to follow its Korean competitors, the competitors it is reported are going the Google way of being â€œsimpler is better.â€ Which strategy would work better only time will tell.