Google Weather Reports Are Back!

Panda Weather Reports have been issued by Google. But not in any official manner, its just that Google's Matt Cutts Tweeted about an upcoming Panda tweaks. Webmasters around the world have welcomed this move by Google.

A Panda Weather Report about an upcoming algorithmic tweak has been tweeted by Google's Matt Cutts. This is what he said-

“Weather report: expect some Panda-related flux in the next few weeks, but will have less impact than previous updates (~2%).”

In case you are not clear what this means, is that there will be a minor Panda update 2.6, in the next few weeks. Panda is an algorithm, that is not constant in ranking factors, but is a special algorithm that Google uses periodically. This Tweet by Cutts means that soon after the Panda 2.5, which is a major update, webmasters can expect another update in the coming weeks. Google keeps bringing in these updates quite regularly, since the first one.

Google is of the view that they do want to give advance notices (weather reports) wherever they deem necessary. It is not possible to do it every time as they tweak the algorithm more than 500 times in a year. 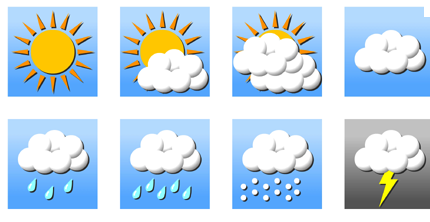 Weather Reports- How It All Began?

In 2003, way before the Panda, the webmasters across the globe were hit by, what was called the “Florida Update”. During the festival shopping season, Google brought in the algorithmic update that shook many search engine optimization experts to the core. People did not know what hit them and forums saw unending discussions.

Post the Florida update, there was a universal demand by the site owners and search engine optimization experts, that some sort of warning is required from Google, before such a massive update. Experts were of the view, that post any algorithmic update, webmasters are clueless as to what went wrong with their site, why have they been hit. That is why, it is recommended that search engines should give some information prior to changing the algorithms or something other update that will affect the sites.

This demand for some sort of warning, took the name of “Weather Reports”, and while Google did not do anything about it, Yahoo began issuing them in 2005. Google never issued any formal weather reports, only that Matt Cutts mentioned them in his posts, like little titbits on information. With statements like:

“In fact, I’ll issue a small weather report: I would not recommend using sneaky JavaScript redirects. Your domains might get rained on in the near future.”

Though it was always unofficial, but weather reports kept coming in till 2008. Matt Cutts gave a report about new Toolbar PageRank. But after that, there have been none so clearly put. Yes, Cutts has always been giving hints of what to do and what not to do but no “Weather Report” as such.

The Google Opinion On The Issue:

Google has always maintained the view that they will blog about changes when it’s a significant one. Even when in the Google Anti-trust Senate hearing (), Google's Eric Schidmt was asked about reports, he said that Google does not give too many hints to keep the spammers at bay. The search engine giant has said that on being asked, it will give a clear answer, confirming or denying any algorithmic update.

What The Webmasters Would Like To Be Informed About:

Webmasters and Search engine optimization experts would like to be forewarned about any major algorithmic update. Also, if they get a spam report or more authoritative information about the update, and also if possible search query statistics. The platform for these updates can be something like the Google Webmaster Central blog, where people can know, discuss and talk about the updates!