Google Webmasters tend to use linked images, CSS and JavaScript files in web pages in order to make it look appealing and functional. If these resources are blocked from crawling, then Googlebot is unable to use them when it renders those pages for search. To find and combat these issues Google Webmaster Tools has now included a Blocked Resources Report. 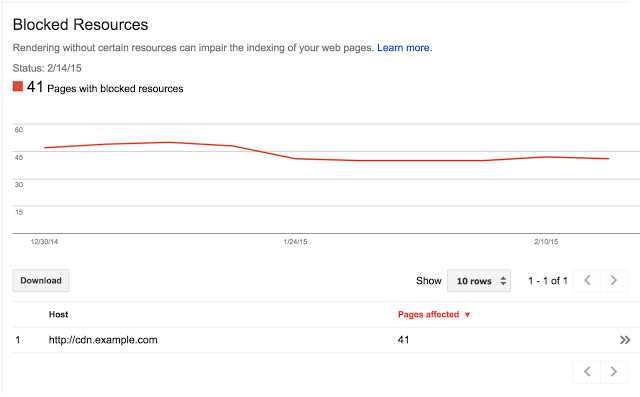 This newly launched report starts by taking the names of the hosts from which your site is using blocked resources such as JavaScript, CSS and images. By clicking on the rows, you can see the list of blocked resources and then the pages that embed them, guiding you through the steps to diagnose and resolve the issues.

“An update to Fetch and Render shows how these blocked resources matter. When you request a URL be fetched and rendered, it now shows screenshots rendered both as Googlebot and as a typical user. This makes it easier to recognize the issues that significantly influence why your pages are seen differently by Googlebot.

Webmaster Tools attempts to show you only the hosts that you might have influence over, so at the moment, we won't show hosts that are used by many different sites (such as popular analytics services). Because it can be time-consuming (usually not for technical reasons!) to update all robots.txt files, we recommend starting with the resources that make the most important visual difference when blocked. Our Help Center article has more information on the steps involved.”