Google has announced the addition of a new feature that will make it more apparent to the site owner if the search rankings of a website are affected by a manual webspam action.

Named as Manual Actions viewer, the new feature is available under the "Search Traffic" tab. It complements the email notifications that are being sent by Google when a manual action against the website is taken. The feature will let site owners check the status of their website on their own, anytime.

Less than two percent of the domains in Google's index face manual action because of the spam, therefore, most of the webmasters do not find anything other than "No manual webspam actions found" when they visit the Manual Actions viewer.

If a site has been affected, the Manual Actions viewer will show the webspam problem under two headings:

In both the cases, Google will list down categories like "hidden text and/or keyword stuffing", "thin content", and "pure spam" to indicate the type of problem present in the site.

In case of Partial matches, Google also shows the affected URLs for individual spam problem but there's a limit of 1,000 URLs per problem listed. However, Google says that the numbers will be more than enough, even for large sites such as YouTube. 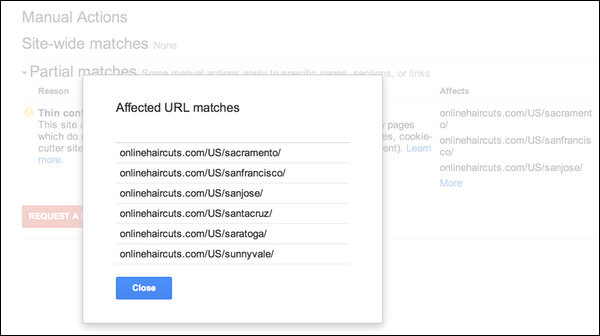 A quick access to new "Request a Review" button is given, which will be available when a manual spam action is listed. On clicking the button, a pop-up window will appear. It will give Google details to webmasters on how to fix the problem.

Along with this, the visitors to existing reconsideration requests page will first be invited to use Manual Actions viewer. It will confirm if a manual action has really been taken.

The categories of manual actions in the new tool will also get a dedicated help or information page that will include new videos from Matt Cutts on the type of webspam problem Google has identified.

The feature is available in all languages that are being supported by Google Webmaster Tools.

Google has also created seven videos to help webmasters deal with common manual action notifications. These videos are on topics such as: