If your website has user-generated content, you need to pay attention to what users are doing; else Google might hit you with a penalty. The recent news of Google hitting Mozilla with spam penalty has become a reason of worry for website owners.

When Google penalized Mozilla, the Web Production manager for Mozilla Chris More took the entire confusion to Google's forums to get some help in dealing with the penalty notice received. Here are the extracts from his post:

We got this message from Google and I have verified it in the webmaster tools:

Google has detected user-generated spam on your site. Typically, this kind of spam is found on forum pages, guestbook pages, or in user profiles.

As a result, Google has applied a manual spam action to your site.

I am unable to find any spam on http://www.mozilla.org. I have tried a site: www.mozilla.org [spam terms] and nothing is showing up on the domain. I did find a spammy page on an old version of the website, but that is 301 redirected to an archive website.

Has anyone had luck finding out what pages Google feels contain user-generated spam? We don’t even have a database on www.mozilla.org to allow the creation of user-generated content!

It was after 12 hours that Google webmaster trends analyst John Mueller replied to More's query. He wrote:

To some extent, we will manually remove any particularly egregious spam from our search results that we find, so some of those pages may not be directly visible in Google’s web-search anymore.

Although, Google told Mozilla about a severe spam trouble with the website resulted in penalty but it did not clarify what kind of spam it was so that Mozilla team could have removed it. Also, there are chances of Google already removing some of the spam from its listings and Mozilla won't be able to locate it through Google search.

This is not just one instance of Google penalizing website's for some unknown spam present in user generated content. BBC also received similar warning and one about having unnatural links in March 2013. When BBC took the issue to the forum, Mueller replied that a single page which had unnatural links pointing at it is the reason for Google's granular action.

Granular action is what Mueller wrote at the end of his answer to Mozilla's query. He said:

Keep in mind that we work to be as granular as possible with our manual actions. Personally, I think it’s good to react to a message like that by looking into ways of catching and resolving the cases that get through your existing UGC infrastructure, but in this particular case, this message does not mean that your site on a whole is critically negatively affected in our search results.

The reply points out that the entire site of Mozilla hasn't been penalized. Only specific parts, which could be a single page or a series of pages, have been detected by Google.

How to Solve the Problem of Granular Action?

Website owners have to remove the bad stuff from the page/pages and send a reconsideration request to Google. However, the manual action notice doesn't spill out the details of what went wrong; it is the work of the publisher to find out the reason.

Earlier, Google didn't reveal the details about penalty because it wanted to leave the spammers thinking about what they did wrong. But lately, Google is trying to get transparent. In October 2013, Google also said that it will be sharing the examples of unnatural links that were spotted, along with the warning notice sent to website owners.

I see some pages similar to those that Pelagic (thanks!) mentioned: https://www.google.com/search?q=site:mozilla.org+cheap+payday+seo (you’ll usually also find them with pharmaceutical brand-names among other terms).

In addition to the add-ons, there are a few blogs hosted on mozilla.org that appear to have little or no moderation on the comments, for example http://blog.mozilla.org/respindola/about/ looks particularly bad. For these kinds of sites, it may make sense to allow the community to help with comment moderation (e.g., allow them to flag or vote-down spam), and to use the rel=nofollow link microformat to let search engines know that you don’t endorse the links in those unmoderated comments.

More tips on handling UGC are at: http://support.google.com/webmasters/bin/answer.py?hl=en&answer=81749

What needs to pay attention to is that Mozilla has been following what Google advises to do in order to avoid issues related to comment spam hurting the site. Dave Naylor in a help discussion said, Mozilla is using “nofollow” around links in those comments, a mechanism where the links pass along no ranking benefit. 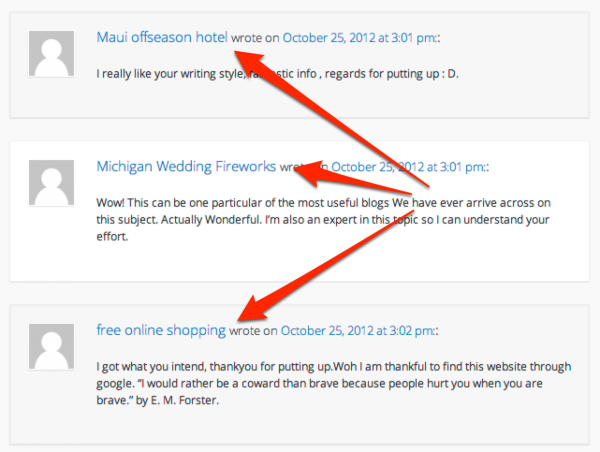 Either there are some terrible parents out there naming their children “Maui Offseason Hotel” and “Free Online Shopping” or someone’s using those names, which link back to websites, in hopes that the links will help the sites rank better.

That’s where nofollow comes in use. Mozilla is adding nofollow attribute to the links, which will put it in the clear:

The only issue here is a

But does that make a difference? The rel attribute can have multiple values and Google itself shows on its page about nofollow.

Screening the user generated content is the only way to save yourself from Google penalty. Make sure that you are adding a nofollow to a link that you don't want to vouch for on the website.