Expect no more Toolbar Google PageRank update in 2013. The last update was done on February 4, 2013 and it has been over 8 months now.

Matt Cutts of Google recently tweeted to @NielsBoschh that he would be surprised to see an update happen before 2013. Google has been doing Toolbar PageRank update every 3 months or so, but the hiatus has been long this time. Many are also saying that Google may bid farewell to Toolbar PageRank now! 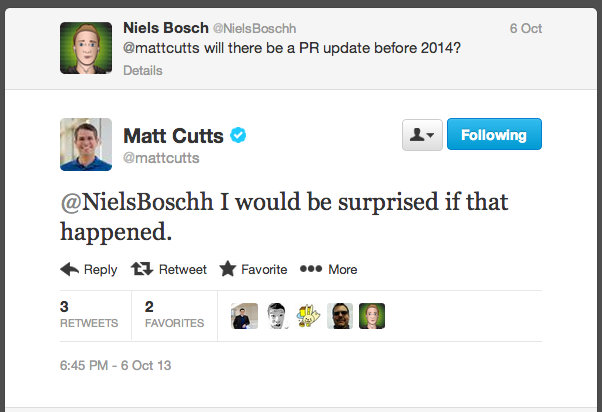 In a Google Webmaster Help video, Matt Cutts came up with an explanation on the decreasing relevance of Toolbar PageRank, stating that recent versions of analytics software doesn’t let users to install toolbar easily and Chrome doesn’t even have a toolbar. This has contributed to Toolbar PageRank lose its relevancy.

Or who knows Google may quietly want it to go away.