The recent data by StatCounter revealed that Yahoo has gained close to 2 point search market share in the US during the previous month. The Yahoo-Firefox default search deal is seen as the reason why Yahoo has notched up a share of 10.4 percent as against 8.6 percent a year back. Google has gained a December share close to 75.2% and Bing around 12.5%. Most recent statistics from comScore, dating back to the time before the Firefox deal shows that Google had 67% share while Bing had a 19.6 percent share and Yahoo around 10.2 share in the US. 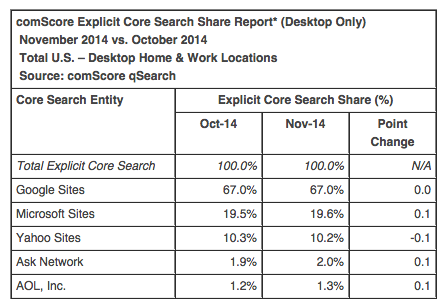 The Yahoo Firefox deal was declared in November last year. This browser has a 16% share of the US market, as per StatCounter. Search advantage could be essential for Yahoo especially as far as revenue is concerned-if they persist over time.

StatCounter characterized the post Firefox position of Yahoo as its highest search share since the year 2009. In comparison, Google recorded its lowest share yet by StatCounter. In the previous month, StatCounter had displayed Yahoo with a significant search bump amidst Firefox 34 users, as can be seen below: 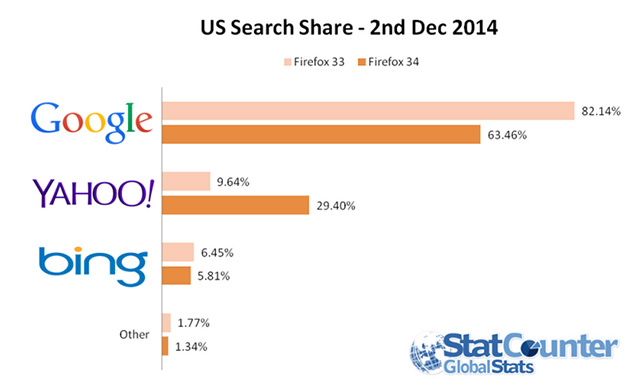 StatCounter has indicated that the Yahoo mobile share is 10.9% while Bing is 5.6% and Google is pegged at close to 84%. The company will report a quarterly and annual 2014 revenues on January 27th, 2015.

With this, Yahoo has achieved its highest US search share in greater than 5 years in the previous month, as per the Web traffic analytics provider. The close to 2 point increase has become from what is clearly a loss for Google. From November to December, the US search share of Google has fallen from 77.3% to 75.2% which is the lowest since the record by StatCounter Global Stats. Since the year 2008, Global States has been tracking the numbers through data associated with 15 billion page views or more on close to 3 million websites per month.

Bing’s share of the search market also experienced a growth, though not as significant or visible as Yahoo’s. Bingo’s share went up from 12.1% to 12.5% from November to December. Other stayed the same dropping to 1.9 percent from 2 percent. Mozilla is a massive factor in Yahoo taking part of the share of search engine Google. For the past 10 years, Google had been the default search engine on Mozilla’s Firefox. The 5 year partnership with Yahoo has now worked in this search engine’s favor. "The move by Mozilla has had a definite impact on U.S. search," Aodhan Cullen, chief executive at StatCounter has been quoted as saying, "The question now is whether Firefox users switch back to Google."