Google has some great news for developers and advertisers. Now Google’s app promotion ads are available across YouTube networks and Google Search. Earlier this year in April Google AdWords announced the introduction of new features and enhancement.

There are over 100 billion searches on a per month basis on Google.com. People search for movies to watch, places to visit, famous restaurants in the nearby area or music to listen to. Sometimes the content is present on a website, sometimes it is in an app. Now with just three simple steps, you can get your app into an ad by using a new, simplified campaign set-up flow that promotes your app on Google.com.

Search ads which are created with this new flow are only shown to people who do not have your app which means that with every click you build a potential user. AdWords verifies prior downloads of the app. Google is encouraging advertisers for using promotion ads in search for new installs as well as to encourage re-engagement.

Mobile app re-engagement campaigns are in beta currently. These ads will deeplink into specific pages in an already installed app when a user looks for information which is relevant to an app already installed by them.

80% of downloaded apps are used just once, it is important to make user that users remember your app when they are searching for content. You can now deep link users directly from Google Search into specific pages of apps already installed by them. For example when someone has the Booking.com app installed on their phone and the same person searches for “San Francisco Hotels” on Google; they can now directly go to the specific page in the Booking.com app that has listings for hotels in San Francisco. 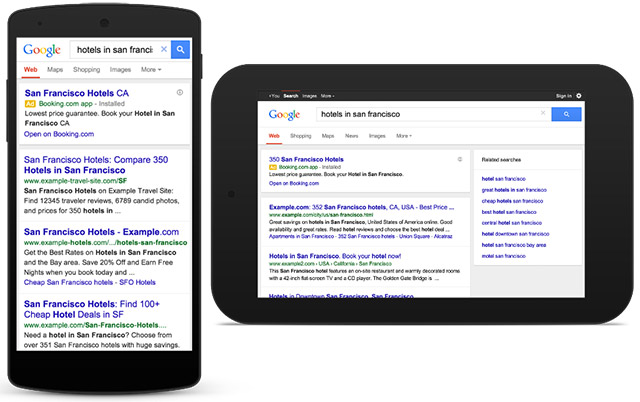 You can now display your app using a new enhancement to TrueView ads when people are watching videos of their interest. This will send users directly to the appropriate app store to download. You can choose an ad format for app promotion which displays the app name, price, icon as well as ratings next to the video ad as well as in the ad preview.

With the help of TrueView ads you can reach your target audience based on previously watched videos, demographics and their interests.

Google has not officially mentioned it but according to the help resource link by them, app promotion ads will only run on mobile and not on desktop.

A number of new insights came up for search advertisers. This includes:

Google is offering a training webinar on September 18 to go over campaign set-up and management. Sign up to promote your app on Google Search here.